For the first course of our fabulous Valentine's Day meal, we started with Classic French Onion Soup. It's a favorite of ours when we go out to eat, but I've just never attempted it before. This recipe turned out VERY scrumptious and pretty easy. It was the first one I found online that was in a slow cooker which made it so much easier than babysitting the onions while they cooked on the stove.

Funny side note: I cut up all the onions,sauteed them, and dumped them into the crock-pot before church. I DID take a shower right after handling the onions and before going to church. My husband was already there and when I walked in the first thing he asked me was "Did you forget to put on deodorant?" I could have DIED! I asked him if I smelt like onion and he confirmed that I did and that's what brought on the comment. I went straight back home and washed my hands with both lemony soup and then with straight lemon juice (just a little tip if you ever need to get the onion smell off) It helped tremendously but I was still self conscious the whole day!

If you make this soup, it's fabulous, but be warned, you and your house will smell like onions!

Ingredients:
1/4cup (1/2 stick) butter
3 large yellow onions, sliced
1 cup dry white wine (I just left this out)
3 cans (14-1/2 ounces each) beef or chicken broth
(I used half beef and half chicken because that's what the pioneer woman does but it would have been just great with beef broth in my opinion)
1 teaspoon Worcestershire sauce
1/2 teaspoon salt
1/2 teaspoon dried thyme leaves
4 slices French bread, toasted
1 cup (4 ounces) shredded Swiss cheese
Fresh thyme for garnish

Directions:
1.Melt butter in large skillet over medium heat. Add onions, cook and stir 15 minutes or until onions are soft and lightly browned. Stir in wine.
2.Combine onion mixture, broth, Worcestershire sauce, salt and thyme in slow cooker. Cover; cook on LOW 4 to 4-1/2 hours.
3.Ladle soup into 4 bowls; top with bread slice and cheese. Garnish with fresh thyme, if desired.
After putting the bread and cheese on top, I put mine under a broiler until the cheese was melted, with the leftovers I put it in the microwave until the cheese was melted and I loved that extra touch.

Here are the delicious results: 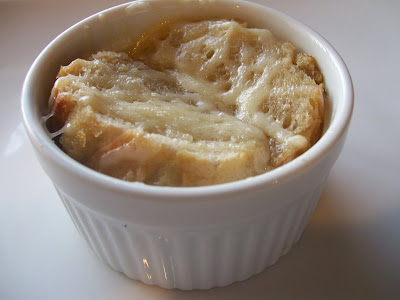