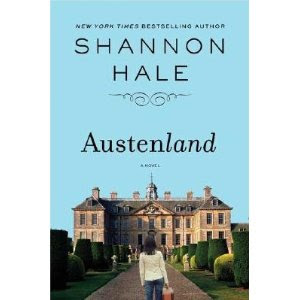 I have never seen Pride and Prejudice. There I said it! All my family has, as well as my in-laws and probably most of my friends. I just never got around to it. HOWEVER, there was a funny TV series on PBS last year that was a spin off of it and I really enjoyed it. Most of the parts I didn't get were easily explained to me by my HUSBAND.

Unfortunately, says my husband, he was subjected to watch Pride and Prejudice a little too much while he was living at home. I just think it's hilarious that he knows way more about it than me. He's a good sport about it.

I was a little hesitant to try this book Austenland by Shannon Hale because of the fact I have read the book it's based off. Here's the description from Shannon Hale's website:

"Jane Hayes is a seemingly normal young New Yorker, but she has a secret. Her obsession with Mr. Darcy, as played by Colin Firth in the BBC adaptation of Pride and Prejudice, is ruining her love life: no real man can compare. But when a wealthy relative bequeaths her a trip to an English resort catering to Austen-crazed women, Jane’s fantasies of meeting the perfect Regency-era gentleman suddenly become realer than she ever could have imagined.

Decked out in empire-waist gowns, Jane struggles to master Regency etiquette and flirts with gardeners and gentlemen—or maybe even, she suspects, with the actors who are playing them. It’s all a game, Jane knows. And yet the longer she stays, the more her insecurities seem to fall away, and the more she wonders: Is she about to kick the Austen obsession for good, or could all her dreams actually culminate in a Mr. Darcy of her own?"

MY REVIEW:Funny, very funny! Always a fan of Shannon Hale, but this one is a different twist to her normal books. She usually writes LDS fiction, but this one isn't. It's funny like her other ones though, which is what I love about her. It's a comedy about this girl who's obsessed with Mr.Darcy, like most girls are. I totally recommend this book, such a good read.
Posted by Jana H. at 3:15 PM